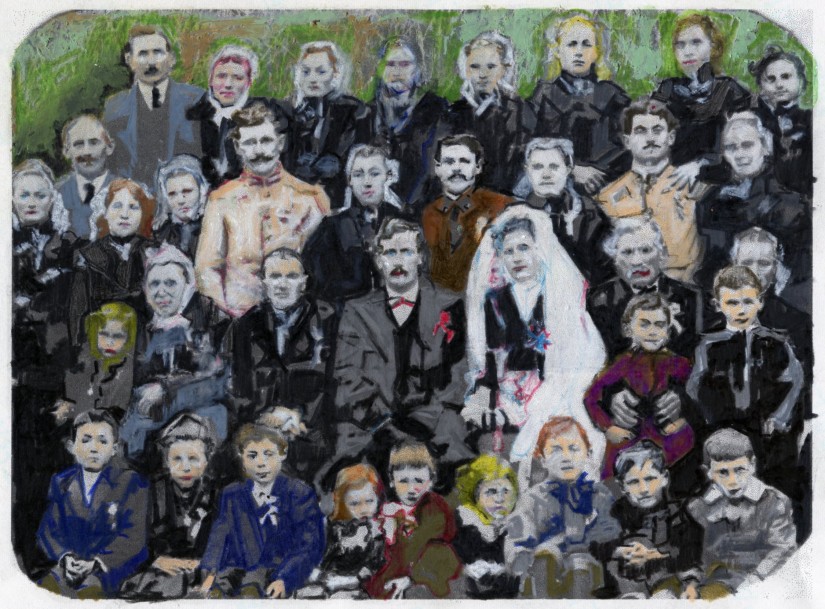 There is extensive history behind this picture. I will give the link to the site, that gives the thorough accounting of these brave people.
Which is the following and I highly encourage you to visit: https://equinoxio21.wordpress.com/2016/06/08/1916-the-bride-wore-black/
Here is a brief synopsis in the author’s own words:
“June 1916. Exactly a century ago. WWI had started two years before. Two years of massive slaughter. For nonsignificant gains in the front line in the north and northeast of France. My grandfather, Louis Prodault, his brothers, cousins and in-laws, had been fighting for two years now. Some had already fallen. Morts pour la France. Fallen for France. Some, like my grandmother’s little brother, Alexandre Després, in the first weeks of the war. More would die until the end, on November 11, 1918.
WWI death count reaches 9 million dead. Plus 8 million wounded. Maimed for life. France paid the highest price with 1.4 million dead. A significant number from Brittany, where my mother’s family comes from. There is a site, called “Mémoire des hommes” that scanned all the death certificates issued by the French army, between 1914 and 1918. A major effort. A few years back I was able to retrieve the certificates of most of my grandfather’s brothers or brother-in-laws. I understand that 6 to 8 brothers went to war, only my grandfather, Louis , and two of his brothers came back.
My mother, Renée, was born in 1926. Ten years later. She would tell me that as a child, all her aunts wore black. Their husbands, or fiancés had been killed at war. It was not uncommon then that a young woman whose fiancé has been killed in the trenches would never marry and wear black the rest of her life.”

I cannot describe the range of emotions that I felt as I drew this image, of the brides, the children, and the few men who had survived
this catastrophe of war. I thank Equinoxio for giving me the permission to do this intimate portrait of real people, who lived what I can
only imagine as nightmare, and did it with quiet grace. It is wonderful to draw an image that holds meaning.

This site uses Akismet to reduce spam. Learn how your comment data is processed.